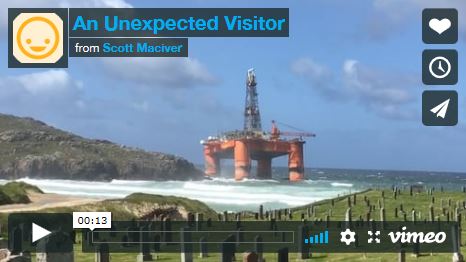 Scott MacIver August 9, 2016 (No Comments)
According to the Scottish Tourist Board, the Outer Hebrides should be on everyone’s ‘100 places to visit in a lifetime,’ with some of the most spectacular scenery in Scotland, beautiful deserted beaches, blue seas, a wealth of history, amazing wildlife and a cultural heritage second to none. Trip Advisor went so far as to name Lewis & Harris as the best Island in Europe in 2014.
The video can be viewed below…

We are well used to welcoming visitors from all over the world to our Islands. This year it was estimated that over 70 cruise liners were booked to visit. However,  yesterday saw the most unexpected of visitors arriving at  Dalmore beach, on the West coast of Lewis. A 17,000 tonne oil rig, which ran aground after breaking her tow in the early hours of Monday morning.

Suffice to say, it has caused quite a stir, both locally and nationally!