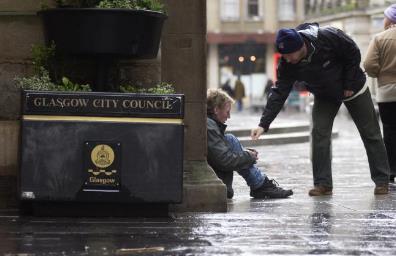 “Now, therefore, you are no longer strangers and foreigners, but fellow citizens with the saints and members of the household of God.” (Ephesians 2:19)

One of the hardest providences we could ever experience, humanly speaking, must surely be that of homelessness. When we think of homelessness, our minds tend to be drawn to those sleeping rough on the streets who, for a variety of reasons, have found themselves at the extreme end of homelessness. They are more vulnerable to becoming victims of violent crime, more likely to develop physical and mental health problems and are isolated from much of society.

We are not likely to encounter this form of homelessness in the Western Isles, but there are many who find themselves sleeping rough in Glasgow, a city which is well known to many Islanders. The shameful thing is that we can find it easy to walk past homeless people, without giving them a second thought or even attempting to stop and speak to them to understand their story.

Despite the fact that our Islands aren’t known for rough sleeping, it may be a surprise to some to find that there are an increasing number of homeless people living in the Western Isles. They are living in temporary accommodation, such as bed & breakfasts, staying with friends or housed in the homeless hostel. According to Comhairle nan Eilean Siar, around half of those accounted for as homeless, is as a result of relationship breakdowns within families.

Last July, we witnessed the arrival of two Syrian families in Stornoway, made homeless through escaping the on-going conflict in Syria. Last week, a further four Syrian families have arrived in Stornoway. Volunteers are being sought and arrangements are being put in place to provide housing and support, as they settle into Island life.

There is no doubt that Europe’s migrant crisis has provided grounds for legitimate concern, in that the open-door asylum policy of the European Union is said to have drawn in those falsely posing as refugees, claiming to be fleeing from war or persecution. This exacerbates the problem for genuine refugees who have passed through untold suffering, cannot return to their homelands and have lost loved ones during conflict.

Physical homelessness is a plight that few of us will likely face during the course of our lives. However, spiritual homelessness is something that every one of us has to contend with. We are born into the world with sinful natures, due to the sin of Adam, the representative of the entire human race, “Behold, I was brought forth in iniquity, and in sin my mother conceived me.” (Psalm 51:5). Adam, through his disobedience, was banished from the Garden, as sin entered the world. The dreadful consequence is that we, his descendants, are born into this world, separated from God and spiritually homeless, with no part in the Kingdom of God and heading towards a lost eternity.

However, there is good news. It was revealed in the first promise made to fallen man, “and I will put enmity between you and the woman, and between your seed and her Seed; He shall bruise your head, and you shall bruise His heel.” (Genesis 3:15). This created the expectation in the Old Testament of the seed, who would descend from Adam and Eve, bruise Satan’s head and defeat him. The “He” is Jesus who, in due time, came and died for the ungodly (Romans 5:6-8), fulfilling this Old Testament promise. He redeemed His people from their sin and turned the bad news of sin into the good news of salvation.

Therefore, not everyone remains spiritually homeless. Spiritual homelessness ends for everyone who trusts in Christ. One well known example is Saul of Tarsus. He was fervent in his persecution of Christians, “breathing threats and murder against the disciples of the Lord.” (Acts 9:1) However, the man whose desire was to destroy the followers of Jesus would himself become a follower of Jesus, as he met the Lord on the road to Damascus. God stopped Saul in his tracks and continues to do so today, with many who oppose him who are made willing in a day of his power. Spiritual homelessness ends for all those who trust in Christ, so that we are, “no longer strangers and foreigners, but fellow citizens with the saints and members of the household of God” (Ephesians 2:19). We are no longer lost, but have an eternal home in the Kingdom of God. Everyone who does not savingly know the Lord Jesus Christ remains lost and spiritually homeless.

Physical homelessness is considered to be one of the worst social problems in the UK. The refugee crisis is bringing those, with whom we would never have otherwise come into contact, into our communities, from completely different religious and cultural backgrounds, and who are as yet unable to speak much English. How ought the church to respond?

The church, on the one hand ought to avoid the danger of falling into the social gospel, which is prevalent in so many churches today, where its core emphasis is centred around humanitarianism and a commitment to social justice, including providing shelter to the homeless and caring for the needy. On the other hand, an overreaction to the social gospel would be to avoid any type of mercy ministry at all and focus only on the proclamation of the Gospel.

It is clear that Jesus and the New Testament writers were primarily concerned with the proclamation of the Gospel of Jesus Christ, yet also with a commitment to showing mercy to the afflicted. Jesus healed the man who was blind from his birth. “He anointed the eyes of the blind man with the clay. And He said to him, “Go, wash in the pool of Siloam” (which is translated, Sent). So he went and washed, and came back seeing” (John 9:6). Jesus later found the man, who could now physically see, so that he would also come to see spiritually, “Then he said, “Lord, I believe!” And he worshiped Him” (John 9:38).

Those who are, or have been, physically homeless on our Island, provide opportunities for us to show compassion and give practical help, not due to the politics of Western guilt or the glorification of empathy, but to follow Jesus’ example of showing mercy to the afflicted. Christ knew what it was like to be an immigrant in a foreign land and to have nowhere to lay His head. It also provides us the opportunity, by God’s grace, to be as salt and light and share the Gospel of salvation, through Jesus Christ. Furthermore, there are many on our Island who are spiritually homeless, without Christ and unaware of their need of Christ. It is our task, by God’s grace, to reach them with the Gospel, so that they will no longer be strangers and foreigners, but fellow citizens with the saints and members of the household of God.