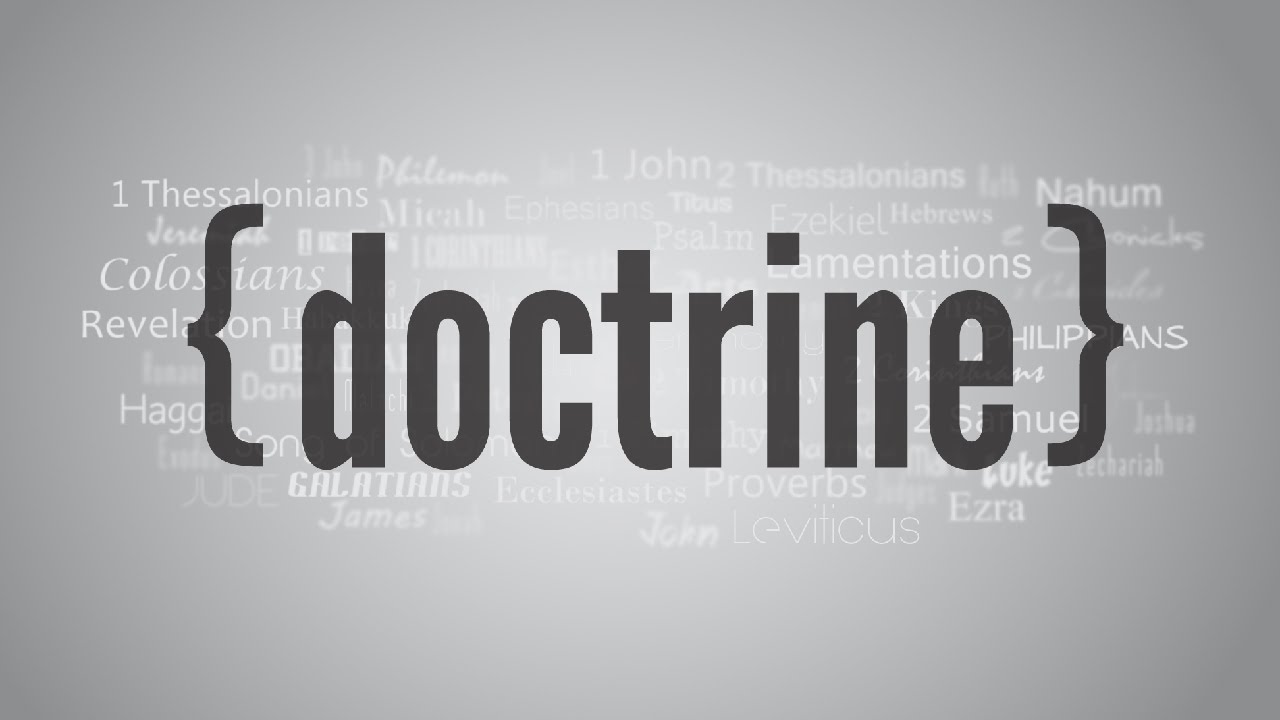 That we should no longer be children, tossed to and fro and carried about with every wind of doctrine…” (Ephesians 4:14)

Many people today react negatively to the words, “theology” and “doctrine.” They are said to involve dry, irrelevant matters, which have no bearing on real life. If that were true, it would be quite understandable why we might want to steer clear and focus our attention elsewhere. Then, there are others who would not consider theology and doctrine to be irrelevant, rather something only for the ministers, theologians and elders. It is not something for the laity, the ordinary man or woman in the pew.

Theology is the study of God, an attempt to understand what God has revealed to us in the Bible. Doctrine simply means “teaching.” Doctrine is really associated with the teaching of major truths, the basic beliefs of Christianity, revealed to us in the Bible. They include, for instance, the deity of Christ (Jesus Christ is God), His substitutionary atonement (Jesus died on the cross for the sin of His people) or His bodily resurrection (Jesus rose again from the dead on the third day).

Dislike of doctrine is not something that is peculiar to our day and age. J.C. Ryle, who ministered in England in the 19th century, addressed this particular issue, in relation to the church of his day,

“[It] is an epidemic which is just now doing great harm, specially among young people…it produces what I venture to call…a “jelly-fish” Christianity in the land: that is, a Christianity without bone, or muscle, or power…Alas! It is a type of much of the religion of this day, of which the leading principle is, “no dogma, no distinct tenets, no positive doctrine.”

We have hundreds of “jellyfish” clergyman, who seem not to have a single bone in their body of divinity. They have no definite opinions . . . they are so afraid of “extreme views” that they have no views of all.

We have thousands of “jellyfish” sermons preached every year, sermons without an edge, or a point, or corner, smooth as billiard balls, awakening no sinner, and edifying no saint. . . .

And worst of all, we have myriads of “jellyfish” worshipers—respectable Church-going people, who have no distinct and definite views about any point in theology. They cannot discern things that differ, any more than colourblind people can distinguish colours. . . . They are “tossed to and fro, like children, by every wind of doctrine”; . . . ever ready for new things, because they have no firm grasp on the old.” (J.C. Ryle, Principles for Churchmen 1900, PP.97-98)

If it is true that aversion to doctrine was an epidemic in Ryle’s day, the same must also be said of the church in our day, surely more so. Sadly, should you walk into the majority of churches in Scotland today, the sermon you hear may likely be Christless and devoid of any offence. The call to repentance is absent, there is no mention of sin and judgement and Christ is not declared as the way, the truth and the life (John 14:6).

The liberal church teaches its own doctrine of tolerance, yet at the same time is particularly intolerant of Biblical doctrine. One such instance was brought to the fore a few years back where a Church of Scotland minister preached a sermon which denied the substitutionary atonement of Christ, “Jesus did not die for our sins. No No No No. That is Ghastly theology. Don’t go there.” As shocking a statement as that is, in and of itself, it is perhaps even more shocking, as that particular pulpit was once the home of reformed preaching dating back to the 19th century.

That surely raises a question in our minds. How does a once Christ preaching pulpit so capitulate over time, that the very foundation of the Gospel is openly denied? How does any congregation or denomination surrender to such an extent that the Gospel has been abandoned altogether? Perhaps Ryle’s words of warning, all these years ago, provide one such reason for the dilapidated state of the church in Scotland today? Theology and doctrine have not been taught from the pulpit. The focus has shifted from teaching the great doctrines of the Bible, to an over emphasis on reaching others with the Gospel, which involves a lowering of standards and watering down of the message to bring people through the door. Eventually, over time, the church, not taught, is tossed to and fro, discernment has gone and the Gospel is lost to the next generation, “My people are destroyed for lack of knowledge” (Hosea 4:6).

Remedy to the Epidemic

What then, is the remedy to what Ryle referred to as an epidemic? Ryle himself, answers with the following words,

“Mark what I say. If you want to do good in these times, you must throw aside indecision, and take up a distinct, sharply-cut, doctrinal religion. . . .

The victories of Christianity, wherever they have been won, have been won by distinct doctrinal theology; by telling men roundly of Christ’s vicarious death and sacrifice; by showing them Christ’s substitution on the cross, and His precious blood; by teaching them justification by faith, and bidding them believe on a crucified Saviour; by preaching ruin by sin, redemption by Christ, regeneration by the Spirit; by lifting up the brazen serpent; by telling men to look and live—to believe, repent, and be converted. . . .

These words are as apt today for us living in 21st century Scotland, as they were for those living in Ryle’s time in England, nearly 140 years ago. Scotland is in desperate need of doctrine. Scotland is in desperate need of ministers who are called by God, to fill the pulpits of our land, who will declare the unsearchable riches of Christ, along with a distinct doctrinal message.

Doctrine is practical. To study doctrine, or for a minister to preach doctrinally from the pulpit is not intended to lead to a mere head knowledge. It is intended to lead to the learning of essential theological truths for the purpose of embracing them in our lives. This is exactly the counsel Timothy was given when he was instructed, “If you instruct the brethren in these things, you will be a good minister of Jesus Christ, nourished in the words of faith and of the good doctrine which you have carefully followed” (1 Timothy 4:6). We ought to pray that the ministers of our land would not only know Christ savingly, but nourish those under their charge with sound doctrine, as good ministers of Christ. We ought to pray for the many in our land who are under a false Gospel, in order that they would be led to hear the Word preached, where Christ is proclaimed and doctrine is taught.

If we, as members of the body of Christ, avoid theology and doctrine and consider it as something purely for the ministers, theologians and elders, how do we expect to be able to live according to the main tenets of the faith? How do we expect to avoid those who teach false doctrine (Romans 16:17)? How are we to engage with those in our daily lives who question how the Bible can be true over and against other religions? We need to study theology and doctrine and be taught it from our pulpits, in order to live out our Christian lives. We ought not to live our lives, according to the changing whims of society and by being tossed to and fro by false doctrine. We ought to live our lives with clarity and consistency, confident that the word of the Lord does not change but endures forever (1 Peter 1:25). This doctrine must conduct and fashion our lives, so that our experience and practice flow from it,