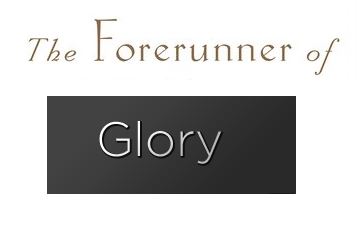 The Forerunner of Glory

In ancient days, when larger ships were unable to get close enough to shore to dock due to stormy conditions, the ship’s anchor would be placed in a small boat called a forerunner. The forerunner carried the anchor through the breakers and dropped it at the harbour securing the larger ship. When weather conditions would permit, the larger ship would slowly be drawn to shore through the anchor chain, and the ship would eventually arrive safely at the harbour.

The Bible is full of wonderful promises, which are varied in nature and applicable in different circumstances. These include, for instance, promises of encouragement (Isaiah 40:31), of comfort in times of affliction (Psalm 50:15) of wisdom (James 1:5) and for those seeking the Lord (Psalm 34:10).

A promise is not fulfilled till it is delivered. We can be guilty of promising much and delivering little. We have all experienced being on the end of a broken promise or being guilty of breaking a promise ourselves. Even with the best will in the world, we are liable to fall short in fulfilling any promise. God, on the other hand, is a promise making and a promise keeping God.

There is an unbreakable connection between the grace of God and the glory of God. This is evidenced in John 1:14, “And the Word became flesh and dwelt among us, and we beheld His glory, the glory as of the only begotten of the Father, full of grace and truth.” Whatever else might be said about this great statement, John makes clear that grace and glory are seen in the person and work of our Lord Jesus Christ.

Ephesians 1:5-6 states, “having predestined us to adoption as sons by Jesus Christ to Himself, according to the good pleasure of His will, to the praise of the glory of His grace, by which He made us accepted in the Beloved.” Here the connection between grace and glory is seen, before the foundation of the world.

In Psalm 84:11, the statement is made that the Lord will give both grace and glory.  Spurgeon brought out the connection between the two, as they relate to the present and future states of the believer:

“The little conjunction “and” in this verse is a diamond rivet binding the present with the future: grace and glory always go together. God has married them, and none can divorce them. The Lord will never deny a soul glory to whom He has freely given to live upon His grace.”

Grace and glory are therefore seen in the Scripture before the foundation of the world, in the present here and now and in the eternity to come. All is bound up in our Lord Jesus Christ.

“To feed a tramp who calls on me is “unmerited favour,” but it is scarcely grace. But suppose that after rob­bing me I should feed this starving tramp—that would be “grace.” Grace, then, is favour shown where there is positive de-merit in the one receiving it.”

Grace is therefore God’s unmerited favour towards those who deserve his eternal punishment. This is seen in the fall of man in Genesis 3:15. As soon as man was in need, God announced His grace, in promising a Saviour who was to come. This was God’s unmerited favour shown towards fallen man, who had robbed God and sinned against Him, much like the tramp in Pink’s illustration.

Grace is a concept that is foreign to sinful human beings because it is not something we merit; it is always something we freely receive. We would like to think that we can do something to earn the favour of God, but the reality is that it is impossible for sinners to earn God’s favour. There is no soundness in us, only wounds and bruises and putrefying sores (Isaiah 1:6). Grace is not something that is earned; it is a gift of God as the Scriptures clearly teach:

“For by grace you have been saved through faith, and that not of yourselves; it is the gift of God, not of works, lest anyone should boast” (Ephesians 2:8-9).

Grace is not some sort of abstract concept, but, as Michael Horton has said, grace is “Jesus Christ in redeeming action.” We, as sinners, are unable to fulfil the demands of the law, and only Christ could pay our debt. He did so by perfectly obeying the law of God and dying on the cross in our place. That way, God’s justice is satisfied and our debt has been paid, when we place our trust in Christ alone. We only experience grace in Him and insofar as we are trusting in anything else we are not under grace. The Galatians embraced another gospel, a gospel of works righteousness.

If we are to understand grace at all, we must understand that it is God’s unmerited favour shown towards us, who were deserving of God’s eternal wrath, available only through Christ’s redeeming work.

How should we respond to God’s grace in Christ? If salvation is by grace, rather than our own works, it should not be seen as giving us licence to live a life of sin (antinomianism), as some would suggest, “What shall we say then? Shall we continue in sin that grace may abound?” (Romans 6:1). Grace ought to lead us to live a life of humility and grateful gratitude in obeying and serving God. It should also lead us to enthusiastically share the message of God’s grace with those who are lost. Without grace, there would be no such thing as Christianity. No sinner is beyond God’s grace. If Paul could be saved from a life of persecuting the church to a life of promoting the faith, who then is too sinful? How can we fail to share such a wonderful message? If we understand God’s grace, surely we should be shouting it from the rooftops.

Alexander Maclaren suggested that there is a sense in which grace and glory are both given simultaneously to the believer in this life; as opposed to grace in this life and glory purely in the life to come, as grace is the experience of Christ’s redeeming action and glory is the reflection of His image. We are transformed from one degree of glory in this life as we behold the face of Christ in His Word.

Whilst it is true that as, in this present state of grace, we behold Christ in the mirror of His Word and are transformed into His image from one degree of glory to another, the fullest connection between grace and glory for the believer is ultimately seen in the glory that will follow in the world to come. Not only is it grace that saves us, grace that keeps us, but it is grace that brings us to glory. Certainly, in this sense, grace comes before glory and, if we are in a state of grace, the glory is sure to follow, as Psalm 84:11 makes clear. Christ is the source of our life in God in the here and now and the basis of our hope for the life to come.

“Eye has not seen, nor ear heard, nor have entered into the heart of man the things which God has prepared for those who love Him” (1 Corinthians 2:9).

The glory of heaven is the gift of God’s grace in Christ. The Scriptures use figurative language to describe heaven as a place of indescribable beauty. The streets are pure gold, the gates are of pearls and its fountain is the water of life (Revelation 21). Whatever heaven is, it is to be with Christ, which is far better (Philippians 1:23. There “God will wipe away every tear from their eyes; there shall be no more death, nor sorrow, nor crying. There shall be no more pain, for the former things have passed away” (Revelation 21:4)

We are all on a journey, towards one of two destinations. Those who are out with Christ are journeying towards a lost eternity where there will be weeping and gnashing of teeth. Nevertheless, there is hope while still on mercies ground, for Christ says, “look unto me and be saved” (Isaiah 45:22).

For all who are in Christ, we are promised His grace whilst we travel and His glory to come. We are unable to get to the dock ourselves, due to the storms of sin within and without. Jesus is both the anchor and the forerunner who has gone before us to make a way and to prepare a place for us, so that where He is, there we may be also (John 14:3). Many ships are being pulled toward the harbour of heaven by our forerunner. One day we will arrive safely home, where we shall ever be with the Lord.

“Grace is but glory begun, and glory is but grace perfected” (Jonathan Edwards).