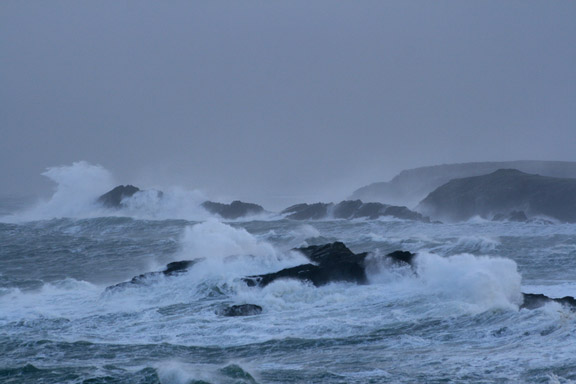 “The wicked are like the troubled sea, when it cannot rest, whose waters cast up mire and dirt. There is no peace, says my God, for the wicked.” (Isaiah 57:20-21)

The Isle of Lewis is steeped in history, heritage and distinctiveness. It may seem strange to those of us who have been born and brought up here, but a visit to the Outer Hebrides is considered a must by many would be travellers. Travel blogs and tourism websites speak enthusiastically of the beautiful beaches, the stunning landscape, the welcoming people, the distinctive culture and the sense of tranquillity and escape.

Recent years have seen an increase in cruise liner visits over the summer months. Long terms plans have been put in place aimed at building a deep water port at Stornoway harbour to allow the berthing of larger vessels, thereby increasing tourism and improving the local economy. Our Island attracts tourists from all over the world throughout the year. A few conversations with tourists will reveal a surprising array of nationalities represented from countries far and wide, some fulfilling a long held ambition to visit our Islands. A brief exchange of words with visitors can be time well spent: you can learn something about those who have travelled such a distance and at the same time making them feel welcome. Consistently, visitors remark how enjoyable their experiences of Island life have been, with many expressing their desire to return again in the future.

Contrast this with the widespread media coverage of Lewis in recent years and you will note a marked difference in both tone and content. Almost invariably, the media portrays Lewis as some sort of dark, depressing backwater, stuck in the past and full of doom and gloom. How could there be such a sharp distinction in reports between, on the one hand, those who have visited and spent time in and amongst the people and experienced the culture, and on the other, those who have spent very little time, if any, in Lewis, often reporting from afar? The answer can be summarised in two words: the Sabbath.

One of the distinguishing elements of our Island heritage is Sunday, the Sabbath Day. It is well known that Lewis has a strong Christian heritage, having experienced great times of revival, where many were converted to Christ. The Gospel was taken seriously, not as some sort of miserable widespread legalism, but as a joyful declaration of the most important message anyone will ever hear. The message is that Jesus came to save sinners, like you and me, just as the Philippian Jailor came to know through the words, “Believe on the Lord Jesus Christ, and you will be saved, you and your household” (Acts 16:31).

In turn, God’s commands, including the command to keep the Sabbath Day were taken seriously, not as a means of attempting to earn salvation, but in thankful gratitude to the Lord for salvation, as a child willingly obeys the parents whom he loves. God has set the day apart for our good in the same way he has set out other commands, such as honouring our parents, not stealing and not killing. Ultimately, the Sabbath Day, as the Lord’s Day, speaks of the resurrection of the Lord Jesus Christ, which we are reminded of each week. It should also remind us that those who believe on Him have risen with Him to newness of life from the grave. It is intended as a day for our spiritual and physical good.

The 24/7 society, which so many aspire to and others are chained to, highlights modernity and convenience, but in reality has led to societies which are drained, stressed and unhealthy. However, restrictions on Sunday openings are not unknown in parts of the USA and Europe. In fact, in 2015 an attempt by the Norwegian government to pass legislation that would have allowed all shops to open on Sundays was met with much resistance. Opinion polls indicated that the majority of the population opposed the proposal and the government announced that it would no longer pursue it.

We might be forgiven to think that emphasising the requirement for some much needed rest would be looked upon in a positive light. However, this seems to have escaped the attention of the majority of our national media, who regularly write about Lewis in terms such as “sanctimonious Sabbatarians” and “religious fanatics”.

Largely due to the Christian influence on our culture, the Sabbath has been strongly observed in Lewis, at least externally, until recent inroads have been made. Church attendance in Lewis is far from what it once was, yet the appreciation of a day of rest is not something that is recognised only by church goers. There are many who seldom, if ever, find themselves in a church pew from one year to the next, who appreciate the quiet and relaxation found in Lewis once a week. They value a day of rest and some have spoken publicly of it influencing their decision to live and work in Lewis.

However, recent years has seen the forming of a small but vocal group of secularists. They have the ear of the media and constantly speak out against this distinctive aspect of our culture, valued by so many. This has led to constant calls for seven day opening of the Sports Centre, supermarkets and the golf course, which have so far been resisted. Latterly, the board of An Lanntair arts centre have taken it upon themselves to open seven days to show films at the cinema.

In each instance the secularists have been highly influential, working behind the scenes to achieve their objective come what may. They speak of wanting to live in Lewis, but of having the same opportunities as are available elsewhere. At the same time, they are willing to attempt to deny the opportunity of a day of rest to those who would have to staff these facilities. In the case of the Sports Centre, the vast majority of staff indicated that they weren’t willing to work seven days, yet this did not cause them to reconsider. Furthermore, they ran a crowd funding campaign to raise £11,400 to pay the cost of a trial opening of the Sports Centre for a year, opening for 3 hours each Sunday. The financial support locally for this proposal clearly was not sufficient, which led to the National Secular Society stepping in to underwrite the costs. The proposal was ultimately rejected by councillors, democratically elected to represent the whole community and not just a small but vocal minority.

The Battle against God

Isaiah speaks of the wicked who have no peace. They may in themselves shake off all thoughts of God, repentance from sin and salvation in Christ, and be comfortable in that. They may enjoy earthly comforts and may even find themselves happy in their fight against God. Yet they have no true peace. What is that true peace? They are wholly ignorant of the peace of the Gospel, which Jesus calls His peace, “Peace I leave with you, My peace I give to you; not as the world gives do I give to you” (John 14:27). This is a peace that is experienced in time and lasts eternally. It consists in turning from sin, trusting in Christ for salvation and living according to His Word.

Who are the wicked? They are those who outwardly oppose God and fight against Him. The wicked are all those who remain unbelieving, unwilling to trust in Christ, however morally upright they may appear to be or persuade themselves they are.

The wonderful thing is that Jesus came to preach peace to those who are afar off, and to those who are near (Ephesians 2:17), so that those who once opposed Him can be reconciled to Him. There are many examples of those who once fought against God but who turned from their sin and trusted in Christ. It may be the case that some of those who now oppose God in seeking to eradicate the Sabbath from Lewis are themselves made willing to trust in Christ and experience this peace for themselves. There is a clear choice before us all: restlessness or rest. The Sabbath, such as it is observed on Lewis, although despised and attacked, speaks of a resurrected Lord and an eternal rest to come. The day that crowns every other day provides great physical and spiritual benefits and ought surely to be preserved for generations to come. Resurrection and rest: what could be more blessed than these?