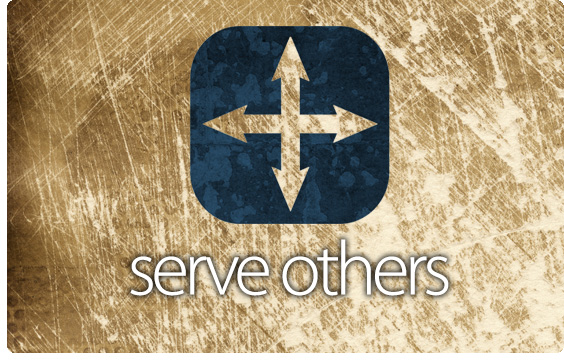 Service is not a uniquely Christian concept. The language of service is something engrained throughout society. Politicians are expected to serve their constituents, businesses serve their customers and teachers, social workers and many others spend their lives serving others. In some cases, great acts of valour are carried out in the service of others, by those who put themselves in harm’s way, even to the point of death.

It is not uncommon to hear motivational speakers extolling the virtues of serving others. One particularly famous household name, who has attained all in terms of worldly achievement said, “What makes a great parent? What makes a great politician? What makes a great human being is your commitment to the purpose of assisting others. I have been to the mountaintop of money, adulation and adoration. I’ve been to the top of the material world mountains and nothing makes you happy other than being useful for others. If you’re not making someone else’s life better, then you’re wasting your time. Your life will become better by making other lives better.”

Selfishness is something which is engrained in human nature and comes to the fore very early on in life. A child doesn’t need to learn to demand “Me, Me, Me!” when pointing to whatever he wants. When we no longer have the excuse of youth, we all too often see the world purely through our own eyes. This type of selfishness is often displayed in celebrity culture, where wealth is flaunted. This was exemplified recently where a French International footballer travelled to Dubai, to visit a celebrity chef, in order to eat a steak covered in gold dust. We know this because he published a video on Instagram in order to display his success and wealth for the world to see.

That is why it is particularly refreshing to come across those, who may have amassed all in terms of worldly fortune and adoration, yet have the perspective that life doesn’t revolve around them. The mindset that believes that it is their duty to better the world and the lives of those around us and says, “I want to do good. I want the world to be better because I was here. I want my life, I want my work, my family, I want it to mean something.”

Fundamental to the concept of service is the idea of doing something for someone else. The greatest servant to ever walk upon the face of the earth was our Lord Jesus Christ, who was prophesied to be the servant of the Lord (Zechariah 3:8), humbled Himself and took upon Himself the form of a servant (Philippians 2:7). The greatest service ever rendered towards man was the work of redemption and salvation, accomplished by Jesus Christ on behalf of His people.

The ultimate act of self-sacrifice is Jesus’ giving of Himself to death on the cross to save His people from their sin. Jesus is God in human flesh, yet despite all that He was entitled to as God, He did not come to live in luxury and to be served. His supreme act of service to others was to lay down His life as a ransom for many. Jesus was willing to humble Himself even unto death, so that, “whoever believes in Him should not perish but have everlasting life.” (John 3:16)

As a 12 year old, Christ said to His mother, “Did you not know that I must be about My Father’s business?” (Luke 2:49) Throughout His life there was no trace of reluctance in His service. At no point did He regret that He came, but his service was offered with gladness, “I delight to do your will, O my God.” (Psalm 40:8).

The word “ransom” has been variously interpreted throughout the history of the church. One of the most famous interpretations is the error which teaches that the death of Christ was a ransom, which the Father paid to the devil, so that the devil would return control of the world back to God. However, God never owed the devil anything and such an interpretation has no basis in Scripture. In reality, the word “ransom” is tied to the idea of substitution. When Jesus offered Himself to God as a sin offering, the effect was that, those in Christ were released from their sins because their debt to God was paid in full.

When the Israelites were in captivity under the hard slavery of Egypt, they were unable to find a way of escape. The Lord intervened and delivered them from their bondage (Exodus 6:1-8). Similarly, we also are in bondage to sin and unable to deliver ourselves for “ all have sinned and fallen short of the glory of God” (Romans 3:23). The idea of the ransom is to be understood as Christ meeting the demands of the law both in its penalty and precepts and thereby fulfilling the law on our behalf and securing our release from captivity and the bondage of our sin.

Not only did the Lord do something for us, but He did something that we were wholly incapable of doing for ourselves, as we are sinners by nature. We’re not sinners because we sin, but we sin because we’re sinners who are dead in trespasses and sins. God demands perfection, which we are incapable of offering. Christ came to pay a debt that His people could not pay, to make a sacrifice they could not make, to suffer a punishment they deserved to suffer and to die a death they deserved to die. As Christ was raised from the dead, God declared that Christ’s atoning sacrifice had been accepted (Romans 4:25). Can we possibly conceive of a greater service?

The Uniqueness of Christian service

As we have noted, there are many who would not profess to be Christians, who regularly serve others with great kindness and love. In fact, there are those who render such service, unbeknown to most, and put many of us as Christians to shame.

However, Christian service is unique and greater than any service offered by unbelievers. Why so? Christian service is unique due to its source, our redemption in Christ. Christ’s death is not a mere example, as many liberal churches today would claim, but Christ’s death primarily related to His atonement, where both His love and justice met. God is love (1 John 4:8) and also just (Deuteronomy 32:4).

Christian service relates to our redemption in Christ. It compels us to service in this world as our response to the salvation we have through Christ’s service. We are to serve Christ and we are to serve others. For instance, we serve Christ through sharing the Gospel with others as, “the love of Christ compels us” (2 Corinthians 5:14). Furthermore, to offer service to others is to do it to Christ Himself, “Lord, when did we see You hungry or thirsty or a stranger or naked or sick or in prison, and did not minister to You?’ Then He will answer them, saying, ‘Assuredly, I say to you, inasmuch as you did not do to one of the least of these, you did not do to Me.’ (Matthew 25:44-45).

If anyone is in Christ, he is a new creature (2 Corinthians 5:17), therefore, though we once lived for ourselves, we now ought to live in consideration of others, to the glory of God. Any service we do offer should not be motivated by our own perceived goodness or our sense of duty to better the world and the lives of those around us. Our service as Christians ought to be offered to the glory of God, in response to the great service Christ rendered to us, so that, like Paul, we can say  “the life which I now live in the flesh I live by faith in the Son of God, who loved me and gave Himself for me” (Galatians 2:20).

Anyone who belongs to Christ is an outpost of eternity in this world. Spurgeon believed that we ought to learn to go about like good Samaritans, seeking whom we may bless! Christ spoke of Himself as a servant and although we cannot offer such service as He did, we, as Christ’s servants, ought to prayerfully put others before ourselves and point them to the greatest Servant that ever lived. However large or small your service may be, for whom are you sacrificing your time and energy this week? “To whom much is given, from him much will be required” (Luke 12:48).