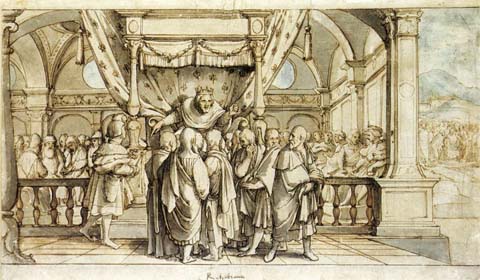 “But he rejected the advice which the elders had given him, and consulted the young men who had grown up with him, who stood before him” (1 Kings 12:8).

Rehoboam was a foolish king. Following the death of his father, King Solomon, the people of Israel approached Rehoboam and offered to serve him faithfully, if he would lighten the burdensome service his father had placed upon them. This likely included a request to reduce the heavy tax burden Solomon had placed on them to maintain his monarchy and court (1 Kings 4:19-23). It also referred to the heavy labour they were subjected to in the building of the temple (1 Kings 5:13-14).

It is a Biblical principle to seek advice when we are faced with making difficult decisions. We ought, first of all to pray (James 1:5) and search the Scriptures (1 John 5:3), but we are also to seek the advice of others. Proverbs tells us, “Where there is no counsel, the people fall; but in the multitude of counsellors there is safety” (Proverbs 11:14).

Rehoboam took three days and sought the advice of others, before answering. This appears to have been a very wise move on Rehoboam’s part, as he avoided rushing to a conclusion. Furthermore, he consulted a range of individuals, both the older and the younger men: “then King Rehoboam consulted the elders who stood before his father Solomon…and consulted the young men who had grown up with him” (verses 6,8). The older men, advised him to relieve the burden and speak well to them, and they would serve him. In stark contrast, the younger men advised him to increase the burden (verses 7,10).

The result was that Rehoboam rejected the advice of the elders and spoke to the people according to the advice he received from the young men: “Then the king answered the people roughly, and rejected the advice which the elders had given him; and he spoke to them according to the advice of the young men, saying, “My father made your yoke heavy, but I will add to your yoke; my father chastised you with whips, but I will chastise you with scourges!” (verses 13-14).

Upon a closer inspection of the passage, Rehoboam’s actions were not as wise as we might at first have thought. First of all, the objection might be raised that older people are not always right, they do not all speak wisdom. We are not to blindly and unquestioningly follow them simply because they are older. That is undoubtedly true. However, in this instance, although Rehoboam approached the old men first, he had determined in his mind that he was not going to take heed to their advice. He seems merely to have given them a cursory hearing. This is apparent from the words he speaks to the young men: “And he said to them, “What advice do you give? How should we answer this people” (verse 9). That is to say, before the young men had uttered a word, he had effectively dismissed the older men and aligned himself with the younger men. To them he said, “tell me what I want to hear.” Instead of lightening the load, Rehoboam intentionally made things worse for the people, with disastrous consequences. Rehoboam’s actions were downright foolish and played a concluding part in the division of the whole kingdom (verses 20-21).

The Spirit of Rehoboam Today

The general assumption of the Scriptures is that age and experience brings with it a wisdom, which is to be honoured by the younger generation, (Deuteronomy 32:7). However, we live in a land where the younger generation increasingly views the older generation with disrespect and contempt. This was brought to the fore in the aftermath of the recent European Union (EU) referendum.

Older people were a lot more inclined to vote to leave the EU than the younger generation. In response, a number of articles were published in reputable newspapers and magazines arguing that the older generation should have been banned from voting in the referendum. The reasoning behind this, they tell us, is that older people have little or no stake in our country’s future. If a 15 year old whose entire economic and political future could be determined by the referendum cannot vote, then neither should a 75 year old whose entire economic and political life is behind him. Furthermore, we are told that, when older people are deemed unfit to drive a car they have their driving licences taken away, then why not remove their right to vote?

Is it not the case that our political leaders and ministers surround themselves with special advisers, who are invariably young? Just as the cult of youth has been devastating for the church, it is destroying society, according to the folly of Rehoboam. What does this tell us about our nation? Firstly, we live in a nation where large numbers are willing to protest at the result of a democratically held referendum, even with a large voter turnout of over 70% of the electorate. Secondly, we live in a nation where the older generation are no longer respected as they once were with their views increasingly being disregarded by many.

This is not only seen in the nation at large but also within the church. On the one hand, the right way to do something is not necessarily the way the older generation have always done it. The Word of God is the only rule to direct us. However, on the other hand, the church seems to be increasingly youth focused to the neglect of the older generation. It seems that the older generation are oftentimes becoming the invisible generation. Are the young in danger of forgetting and forsaking their elders? Is this spirit even abroad in the courts of our churches? Are experienced ministers afforded the respect they have earned? We need only survey the ecclesiastical landscape in Scotland for the answer.

Rehoboam gave the impression that he gave a hearing to the older men, when in reality he merely dismissed their advice altogether. Our nation and the church in our land are falling into the same folly, disregarding and dishonouring those God has chosen to give long life to. To neglect the divinely appointed pattern always leads to ruin. Rehoboam was ruined. The kingdom was ruined. We will ruin ourselves too unless we ask our fathers and our elders that they might tell us. The elders may not always be wise but it is never wise not to consult the elders.

A Healthy Nation and Church

A healthy nation requires, and ought to encourage and expect the active involvement of the older generation. They have been through the school of life, and all have a stake in society. Moreover, a healthy church ought to be thankful for the older generation in its pews, as much as the younger generation. Is age not a source of opportunity and resource? We are reminded that “with the aged is wisdom; and in length of days understanding” (Job 12:12).

Much of the older generation in our churches have been following Christ for many years and understand better than anyone the faithfulness of Christ. They can teach us from the Word, model the Gospel, articulate their experiences and encourage us on the way. Our nation has been blessed with Gospel privileges, yet a generation has arisen which knows not the Lord. How much more then ought we to utilise and learn from the older generation who take the Gospel seriously and live it out as we pray for our nation to repent and return to Christ?

Psalm 92 speaks of the righteous who still bear fruit in old age. In commenting on these verses Rev Albert Martin viewed old age positively and said: “on my sixtieth birthday, some twenty-one years ago, I took these verses as my own special companion for whatever years were yet marked out for me…”

The righteous shall flourish like a palm tree, He shall grow like a cedar in Lebanon. Those who are planted in the house of the Lord Shall flourish in the courts of our God. They shall still bear fruit in old age; They shall be fresh and flourishing.

2 thoughts on “Forsaking the Older Generation”