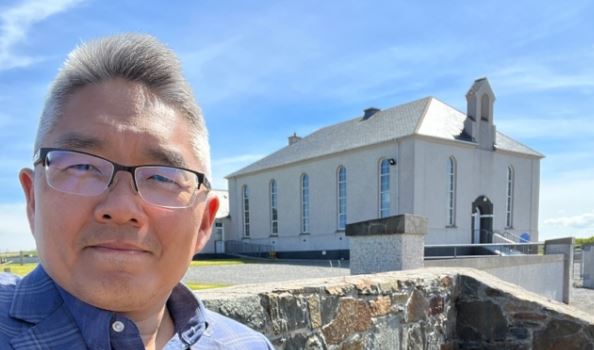 Can you provide a bit of background information about yourself, your family and how you came to faith?

I was born in Seoul, South Korea in 1972. By God’s grace, I was born into a very strong Christian home where even my great grandparents were among the first Christians converted in Korea. Our family emigrated to Toronto, Canada when I was 2 years old and we attended a church called the Free Presbyterian Church (of  Ulster) where I got saved under the preaching ministry of Frank McClelland as a boy of 10 years. I spent my childhood and youth in Canada until coming down to Greenville SC at the age of 18 to study Computer Science at Bob Jones University.

What are the origins and mission of SermonAudio?

I have always loved preaching growing up. As a boy, I would listen to sermons on cassette tapes over and over again. When I came to Greenville, I was greatly moved by the ministry of Alan Cairns in my home church at Faith Free Presbyterian Church. It was always a frustration for me, however, that more people couldn’t be enjoying what I was enjoying week after week. I imagined that there were probably hundreds of other small but faithful churches all over the world that suffered the same experience. I wanted to create a platform by which even the smallest church could have a voice to reach many more outside its walls. This is where the idea of SermonAudio was born.

How has SermonAudio evolved over the years?

SermonAudio in many ways hasn’t changed much over the years. People who visit the site will see a site that has maintained a consistent purpose and format throughout the 22 years of our existence. However, a great deal has changed behind the scenes with our infrastructure. It has significantly outgrown the initial set of servers that ran in a room in my house for many years. To date, we have distributed over 400 million sermons to every country on the planet at a rate of 3M+ sermons per month and growing.

What are the greatest blessings and challenges you have experienced through SermonAudio?

Some of our greatest blessings have come in the form of testimonials of individuals that have found saving faith through the preaching on the site. It has also been a great blessing to hear that churches themselves receive similar feedback directly through the listeners on the site. The challenges of SermonAudio are many but it can be summed up by saying we are always facing technical challenges that stretch our abilities and faith.

What is the Vault and why is it important?

The Vault is a project that we have undertaken to, essentially, create our own mini-cloud so we don’t  have to depend on cloud services to operate SermonAudio. The only real answer to true independence is to build our own infrastructure. This means having our own set of physical servers and hard drives to run SermonAudio’s core services. It also involves building a strategic partnership with an educational institution like BJU in order to discover and train a continual line of new help as we move into the future. All of this is what makes up the Vault project. You can learn more (Here).

Can you explain the purpose of the Foundations Conference?

As much as we believe strongly in the importance of preaching, we feel there is a sad decline in prayer in the life of the church generally. Acts 6:4 teaches us that the early church put equal emphasis on both. The Foundations Conference is our attempt to bring into sharp focus the importance of both prayer and the ministry of the Word. We intentionally try to invite speakers from a broad spectrum of backgrounds while within the confines of Biblical orthodoxy and conservative convictions.

What is the united prayer meeting and who is it for?

The United Prayer meeting was born in response to a little booklet written by Jonathan Edwards called, An Humble Attempt to Promote Explicit Agreement and Visible Union of God’s People in Extraordinary Prayer for the Revival of Religion and the Advancement of Christ’s Kingdom on Earth. This title pretty much sums up the purpose of our United Prayer meetings. It is a humble attempt to promote agreement and union among God’s people in prayer that goes beyond our “normal” prayers and specifically focuses on the revival of religion and the advancement of the Gospel throughout the world. You can learn more about this (here).

Is there anything in particular you would like us to pray for?

Please pray that we would stay humble so as to be used of the Lord to play a part in the fulfilment of Matthew 24:14 and Habakkuk 2:14. We believe in the God of the impossible, and we want to be a living testament to that fact.

One thought on “An Interview with Steven Lee, Sermon Audio Founder”